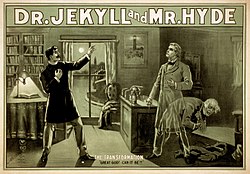 In the world of twelve-step programs, there’s a ubiquitous construct:  the “inner addict.”  The inner addict is a sort of alter ego, a misanthropic, narcissistic Mr. Hyde to our better, more welcome sense of ourselves as a benevolent Dr. Jekyll.  The “inner addict” is the source of all the insanity, the lies, the self-deception, of which we are capable.  For instance, my inner addict had me genuinely convinced that I wasn’t a CPOS, but instead, was an enlightened, if sexually frustrated, man, seeking to improve and discover myself for the benefit of my wife.

It doesn’t take a lot of hindsight or perspective to see that it is simply insane for anyone to imagine that decisions they make that involve adultery, expenditure of vast sums of money and time, and near-constant deception and obsession simply can’t be in service of a healthy marriage.  And yet… and yet… I genuinely believed that lie.  My inner addict was convincing.

The culture of twelve-step programs has a weakness, though:  it’s utterly, completely, absolutist.  The culture decrees that any deviation from twelve-step orthodoxy is, almost by definition, one’s inner addict speaking.  As is the custom in twelve-step programs, I won’t speak for anyone other than myself, but for me, this was a devastating limit to the programs’ usefulness to me.  My problem wasn’t that I was “addicted to sex.”  The problem was that I had become accustomed to responding to strong emotions (whether positive or negative) with the balm of sex, and that doing so had required the construction of an increasingly elaborate, and increasingly taxing, edifice of deceit.  If I was addicted to anything, it was to numbing myself, and to keeping that secret.

Twelve-step programs posit a simple (though certainly not easy) path to “recovery”:  follow the twelve steps, turn one’s life over to a “higher power.”  People put themselves through all sorts of tergiversations about just what a “higher power” is, or can be.  Is it God?  Is it one’s 12-step fellowship?  The “home group” they attend most frequently?  A dog?  A radiator?  People have used all these and lots more to great effect.  For me, it was straightforward:  my higher power was that which I knew, in my soul, was true, right and good – that which I didn’t have to think a moment to know was good, but which I knew instantly, in a bodily way, was good.

That worked well for me, for a long time.

What my higher power cared about was a much more basic concern:  that I not harm anyone (including myself) through my sexuality.

This site uses Akismet to reduce spam. Learn how your comment data is processed.

L suggested I do this, and I must confess, I think she's on to something....

There's a lot of different stuff going on in this blog. The links in the top bar provide one path. The categories of my posts - My story, Memory or fantasy, Musing, Criticism, and Written by others - provide another.

The "My story" page, though, is essential to understanding anything else that goes on here. Please go there first.

And when you're done? Then go to the "Reading guide". That'll help you understand a bit more about me, and about what's here, more efficiently. Or? Just read....

Girl on the net